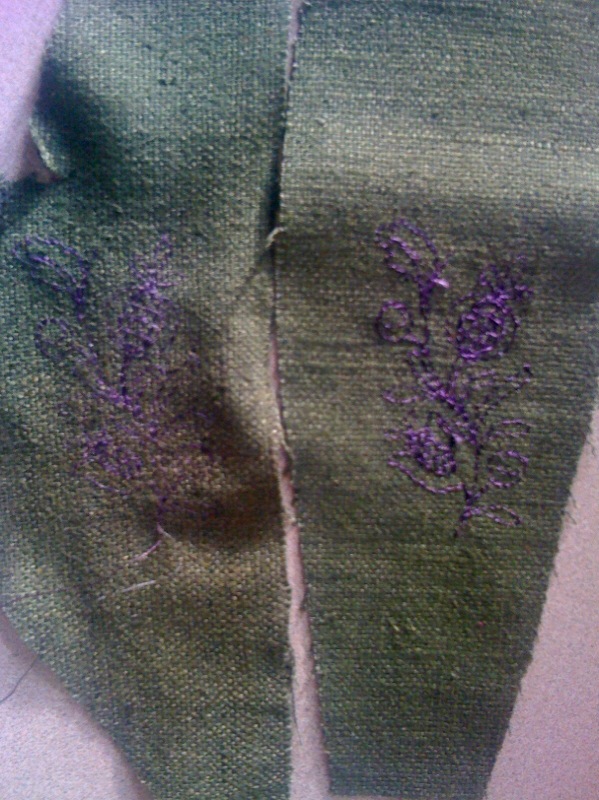 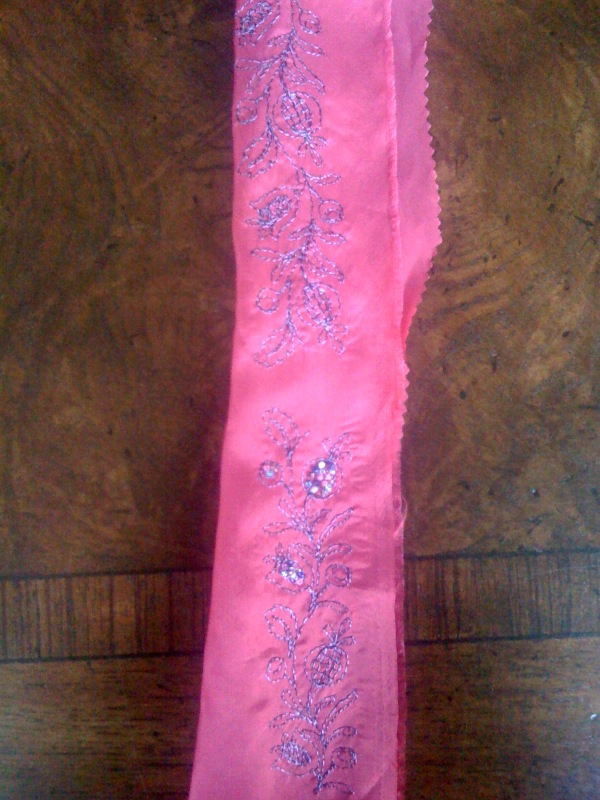 This raw silk is driving me nuts! I made a sample stich out with the 30 weight thread and it disappeared in the weave of the fabric. Next I tried using two strands of rayon 40 weight thread in deep purple and gunmetal grey. That also seemed to disappear. So I tried using a topper - one that you remove with heat. I didn't want to chance getting my iron all gummed up, so I used a teflon press cloth. Bad idea! The topper melted and formed a sticky glue which stuck my fabric to the non stick press cloth. I laid the teflon back down, and pressed again, hoping by some stroke of magic that it would make a difference. Nope. If I worked quickly enough, I could remove the teflon before it stuck again, but I still had a melty mess. Then I was sticken with a flash of sheer stupidity. Somehow, I thought it would be a great idea to try appying the iron directly to the goo. Maybe it will just disintigrate into thin air. Maybe the teflon press cloth was the reason the topper didn't just disappear... Nope. The sticky goo shrunk into little bits of brown gunk. And my iron was smeared with it. And my fabric looked like crap. So, I tried to clean the iron with a damp sponge while it was still hot. Then I thought, maybe it needs to burn off. My sewing room began to have this smell... I got the iron good and hot and tried to rub all the goo off on some cotton drill cloth. Then I gave up and unplugged the iron. Later, I thought about the beaded embroidery and began to think it would be a good idea to make my own embroidered ribbon trim and use that instead of embroidering directly on the raw silk. I stitched out the design and painstakingly picked almost all of the stabilizer off the back side. Then before beading, I folded the "ribbon" in half and gave it a nice pressing. AAAaaaaargh! brown steaks on my rayon from the gunk still stuck to my iron!! Luckily, it is on the side that won't show. I hand beaded some of it, and the more I worked with it, the more I began to hate everything about it. Does this ever happen to you? I am losing my mojo on this project. It seems to happen a lot, lately. I remember I couldn't WAIT to be done with the suit dress. Why is it that my sewing can never live up to my standards????

Does anyone know of a good way to clean gunk off of an iron without scratching it?