Last fall, I participated in a fun sew along on line at artisanssquare.com.  This was my first time sewing leather - actually it was faux leather.  I have never sewn real leather.

Here is the pattern I used:

This project held a few firsts for me.


* sewing a material which will have permanent needle holes

* attaching a collar with a collar band

* pressing a fabric which will melt if touched with the iron

Some of these things posed bigger challenges than others for me.

sewing a material which will have permanent needle holes


This was especially difficult for me.  I like to baste before I sew.
I also often take seams apart and resew them until I am satisfied.
Two things which helped were binder clips and IDT.  IDT is a feature on
some Pfaff sewing machines, which feeds fabric from both the top and
bottom as you sew.  It is like a built in walking foot.  But by far,
the biggest help was using lapped seams.  With lapped seams, I did not
have to sew reverse curves together in the princess seams. I simply
laid one piece over another and sewed.  Well, it wasn't really that
simple.  I marked all the seam lines as the pattern pieces were cut.


The pattern calls for lapped seams, which I really liked sewing.
See how the backing of the fabric is a white color?  I was worried that
the white would show if I used lapped seams, so I made some test
samples and found it would not be a problem.  I experimented with
thread color, stitch length and presser foot pressure, and the sample
to the right is what I set my machine up to produce.  I used
contrasting thread for my samples to make it easy to judge the right
tension, and I really liked the the look of the olive color against the
red, so I went with it for the finished version.  I did have some stray
white fibers peaking out of the seams in some places.  I used tweezers
and sharp embroidery scissors to trim them all back.

What did I learn?

I learned how to bag a lining.  I had read how to do it a number of
times over the years, but I never did it by turning the whole assembly
through an opening in the sleeve.

What would I do differently?

I was challenged by the collar.  Since I was not able to baste, I
have two rows of stitching holding the band to the jacket - One for the
inner band and then another for the outer band.  Next time I sew this
type of collar on faux leather, I will use glue to hold the inner
collar in place.  Then I will have one line of stitches showing where
the outer collar band is attached.  Another thing I will do differently
involves the zipper seams.  Again, I have double stitching in some
areas around the zippers which would be eliminated with the use of
glue.  Normally, I baste and then remove those stitches, but this type
of fabric is incompatible with that method.

*Use fabric glue to baste where necessary

What I will definitely do again?
*use binder clips
*mark underlapped seam lines
*make samples to determine stitch length and presser foot pressure
*use low heat and a thick press cloth and press test samples
*draft a facing for the peplum


This leather jacket sew-along was a fun project for me.  The
encouragement, advice, and praise from all of the women on artisan square was wonderful.
It was like having a bunch of friends in my sewing room with me as I went along.

Here are some pictures of my progress

The first thing I assembled was the full back.

Then the fronts with their zippers, the side seams and the shoulder seams... 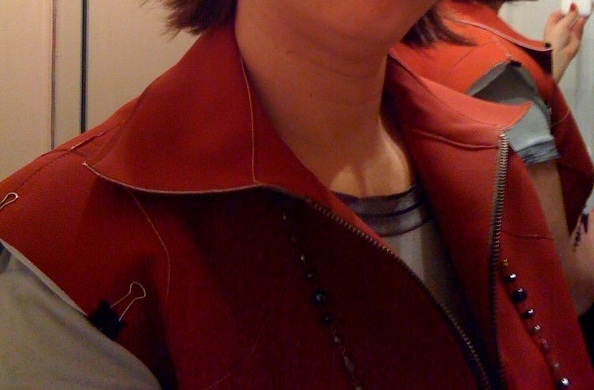 Next came the collar... 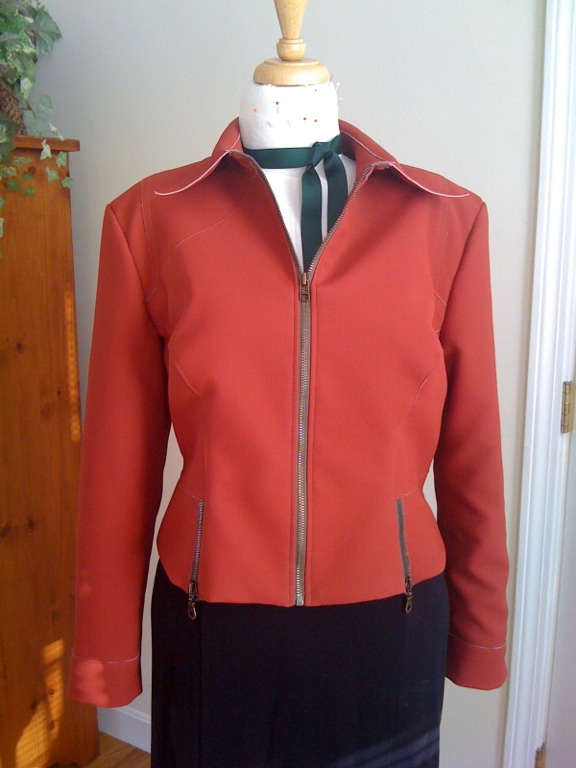 ...then the sleeves and the lining. 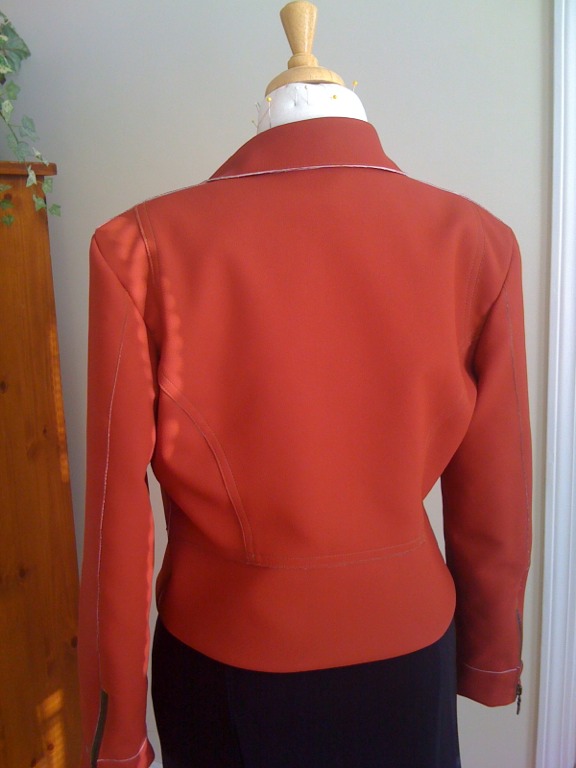 Here
I have it turned inside out to show the lining.  I used a silk print I
found at the Vogue Fabrics booth at last year's Sewing and Quilting
Expo in Worcester.  (I will not be able to machine wash it. I'll just
use a steamer on the inside and a damp cloth on the leather.) 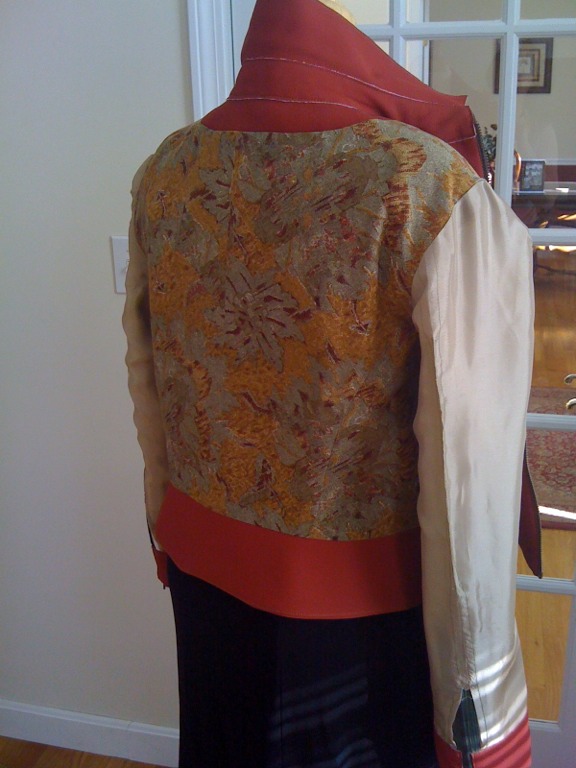 If you look closely at the sleeve seam, you can see how big the opening was that I used to turn the lining to the inside.

All finished and ready to go out on the town!

But first I need to finish my coffee!

The
shoulders are a little too wide, but I am happy enough with it to
actually wear it.  Overall - pretty decent fit for ZERO pattern
alterations!!
Now to make a skirt....