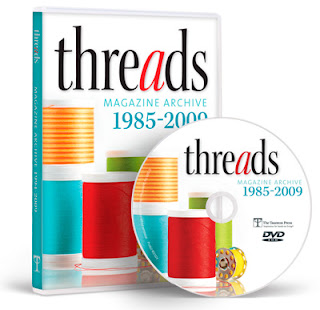 I began sewing in 1993 and discovered THREADS magazine a few years after in a bookstore/cafe.  I used to love when I found a new issue on the magazine rack, and soon I was a loyal subscriber.  I have every issue I ever bought including two duplicates.  I keep them all in a cabinet/window seat that I made for my sewing room.  Maybe I should say they belong in the cabinet, but often, issues can be found on my night table, by the bathtub, or on the living room hassock.  My THREADS back issues have made friends with my MARFY catalogues and old BURDA magazines, and they can be seen hanging out together all over my house.  A couple of years ago, THREADS changed their format, and I was very disappointed.  While I enjoy reading most things sewing related, THREADS Magazine was always a special treat because it featured advanced techniques and fabulous photos of details I might aspire to be capable of duplicating one day.  I found it a source of inspiration month after month.  I enjoyed the photographs and letters sent in by folks like me who love to challenge themselves with couture quality garment sewing.  I drooled over the back covers with their beautiful detailed photographs of museum quality embroidery and beading.  But then Threads changed and began to include more articles about sewing basics and every day notions.  There was a big article on pins, and I remember being a little sad, thinking there must not be enough people like me to support the magazine, and they had to expand into a different market.  I began to read letters from readers who absolutely loved the new style, and those who, like me, were very disappointed.  Some cancelled their subscriptions.  I held out for a few issues, remembering the new Coke fiasco and hoping Threads would also revert back to the old successful formula. But then I cancelled as well.
When I heard that THREADS was selling an archive DVD including every issue from 1985-2009, I was undecided about buying it.  Mostly when I am on line, I read blogs and snoop shop, looking for pictures, pictures, pictures.  I can't get enough pictures of clothes, accessories, shoes - anything fashion!  I dismissed the idea and went on happily with my life.  Then I read a thread on artisan square about the archive and it was so highly recommended, I began to reconsider - especially after reading that THREADS had a rough patch and had gotten better.  I thought maybe I jumped ship too quickly by cancelling my subscription and I started to wonder what I had missed.  I went ahead and ordered the archive DVD despite some customer reservations which were expressed regarding missing articles and the way TAUNTON PRESS handled the situation.

I picked up the MAY 2010 issue while I was in Boston shopping at Winmill Fabrics, but I was not encouraged, and I was beginning to think I should not have ordered the archive DVD.  Recently, it was delivered and I discovered that even without launching the application on my Mac, all of the content is searchable using spotlight (command spacebar).  Color me happy!  I remembered an article written by Pam Ptak about S-shaped darts, but I couldn't remember what the picture on the cover was or even the title of the article.  I typed in S-shaped darts and BINGO! up pops a link to a pdf of the entire issue featuring that article! SCHWEEEEET!  I have not yet read through any of the recent issues which I missed.  After looking through the April/May 2010 issue, I must say I was somewhat disappointed.  What is your opinion?  Are the glory days of THREADS all passed?